“She really is a wonder” The Times. Jess studied and was mentored by the legendary saxophonist John Harle and graduated from Guildhall School of Music with a Masters with distinction in 2020. Gillam performs her solo show at Drapers' Hall. Supported by the National Lottery and Arts Council England. 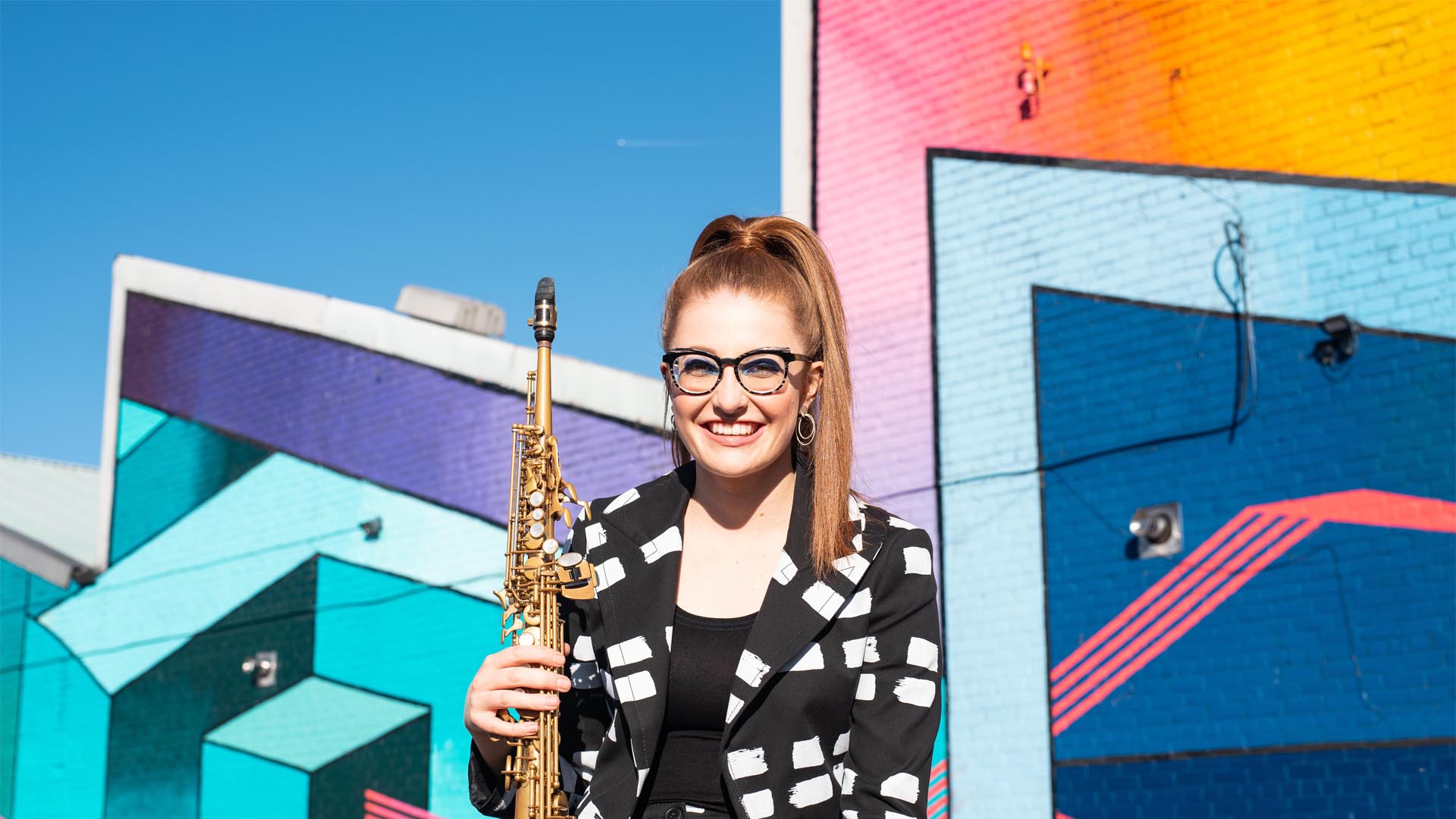 Hailing from Ulverston in Cumbria, Jess Gillam is animating the music world with her outstanding talent and infectious personality.

After performing at the prestigious Last Night of the Proms in 2018 and having her performance described as ‘the indisputable highlight’ by BBC News, Jess continues to grow her international career as well as presenting on TV and Radio.

Jess is passionate about inspiring and bringing joy to people through music and has continued to do so throughout the Coronavirus pandemic. In May 2020 Jess appeared as a special guest at the Royal Albert Hall’s VE Day 75 Commemoration and in July she returned for a performance as part of the ‘Royal Albert Home’ series. While in lockdown Jess launched her Virtual Scratch Orchestra, inviting musicians of any standard to come together to play music virtually with her. The orchestra played music by David Bowie and The Beatles as well as a Christmas special of Leroy Anderson’s ‘Sleigh Ride’. Over 2,000 people from around 30 different countries took part across the two projects, aged 2-94, playing a huge range of instruments.

Recently (before the impacts of COVID-19), Jess has enjoyed performances around the globe. Highlights include performances at the Last Night of the BBC Proms Japan, with the Minnesota Orchestra, at the Lucerne Festival and with Orchestre Philharmonique de Radio France. This season she continues to perform throughout the UK and Europe in recital as well as with BBC National Orchestra of Wales, Scottish Chamber Orchestra, the Hallé, Manchester Camerata and the National Youth Orchestra of Great Britain. In addition, Jess has been chosen as one of ECHO’s Rising Stars for season 2020-21, which will see her performing in prestigious venues all over Europe and premiering a special commission written for her by Edmund Finnis. Jess will also tour for the first time with her own band – the Jess Gillam Ensemble – with what promises to be an explosive concert designed to showcase the diversity, dynamism and versatility of the saxophone!

Jess is the first ever saxophonist to be signed to Decca Classics and recently released her second album, ‘TIME’, which shot to No.1 in the Official UK Classical Charts, as did her debut album ‘RISE’. Jess curated the album to mirror the arc of energy in a passing day and the constant orbit of our existence. She loves music from many genres and the album includes music by Nyman, Björk, Meredith Monk, James Blake, Max Richter, Joby Talbot, Brian Eno, Anna Meredith and Thom Yorke. Keen to expand the saxophone repertoire, she also had two pieces written for the album – one by Luke Howard and one by Goldfrapp’s Will Gregory. She has also commissioned and premiered music by Anna Clyne and John Harle and is constantly working on new commissioning projects. Jess’ debut album was released in 2019 and features a selection of her favourite pieces ranging from Marcello and Shostakovich to David Bowie and Kate Bush. Both albums have been highly celebrated and received rave reviews.

Gillam is also a presenter on TV and Radio. She became the youngest ever presenter for BBC Radio 3 and hosts her own weekly show and podcast called ‘This Classical Life’ where she chats to musical guests to swap tracks and share the music they love. The show has been very well received by audiences and critics alike and in 2020 won the award for ‘Best Specialist Music Programme’ at the Audio & Radio Industry Awards (ARIAS) a BBC Music Award in the ‘Best Music Production’ category. She has also been a guest presenter for BBC Radio 2 on ‘Sunday Night is Music Night’ and co-hosted a mini series with James Naughtie for BBC Radio 4 on the Today Programme. The Guardian has stated ‘there are many more established presenters who lack Gillam’s warmth and impressive ability’. In 2019 Jess also presented five BBC Proms live on television alongside Katie Derham and Tom Service.

She has been the recipient of a Classic BRIT Award (in the Sound of Classical Poll), was the first ever saxophonist to reach the final of BBC Young Musician, and in 2019, performed live at the BAFTAs (British Academy of Film and Television Awards) to millions of viewers at home. In 2020 Jess has been nominated for The Times Breakthrough Award.

Jess studied and was mentored by the legendary saxophonist John Harle and graduated from Guildhall School of Music with a Masters with distinction in 2020.

A free spirit in style and character, Gillam is a passionate advocate for the power of music in society, often combining her concert engagements with educational and social projects. She is a patron for Awards for Young Musicians and a trustee for the HarrisonParrott Foundation, working towards full inclusivity of all ethnicities, genders, disabilities and social backgrounds with equal access to the arts.