Plans to create a new countryside walking and cycling route near Coventry city centre have taken another step forwards, as work starts on-site on Phase 1 of the Loop Line route on 20 June 2022.

The work has been funded by a grant from West Midlands Combined Authority Community Fund and is being delivered by Coventry City Council in partnership with Historic Coventry Trust. These works will take approximately eight weeks.

Phase 1 of the woodland route will run from the new Binley Road Cycleway at Gosford Green to Gosford Park School / Humber Avenue walkway and provides increased accessibility for local residents as well as an attractive leisure route.

Further phases will see the route extended to the full 1Km length of the disused railway line to connect with the southern end of Charterhouse Heritage Park, a wildlife area close to the mainline railway. Close by is the seven-bay Grade 2 Listed Sherbourne Viaduct, designed by Robert Stephenson in 1836 to carry the world’s first major inter-city railway over the River Sherbourne.  The path will continue back to the city centre past the Charterhouse Carthusian monastery, which is currently being restored by Historic Coventry Trust as a major visitor attraction.

Planning permission for all the phases of the Loop Line have been granted, and  funding has been granted from Severn Trent Community Fund towards the construction cost of the remaining phases.  It is hoped that all phases will be completed in 2023.

The loop line was laid out to bypass Coventry station for goods traffic only. It was completed in 1914 and closed in 1963. The disused line was sold off to private owners and fenced off to exclude any public access.  The land was acquired by Historic Coventry Trust in August 2018 to open up the area to the community. The line was originally devoid of any vegetation, but natural re-wilding has created urban woodland which is now protected by tree preservation orders. It was designated as an ‘Asset of Community Value’ in 2013 following a campaign by the Trust with the local Charterhouse community which paved the way for acquisition. 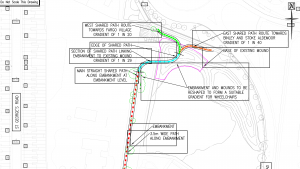